Now, for the final Castlepoint installment. You wouldn’t know we were only there for two days, but we definitely took advantage of the time we had.

On Sunday, we the three of us drove back towards central Castlepoint and set out in the opposite direction from the lighthouse, towards Castle Rock. It’s 162 meters high (about 530 feet) but rises sharply from the surrounding terrain and then drops off abruptly seaward on the other side, creating quite the dramatic profile. Signs said the hike would be a couple hours return.

The first part of the path ran parallel to Deliverance Cove.

Before long, we hit the path heading straight for Castle Rock. 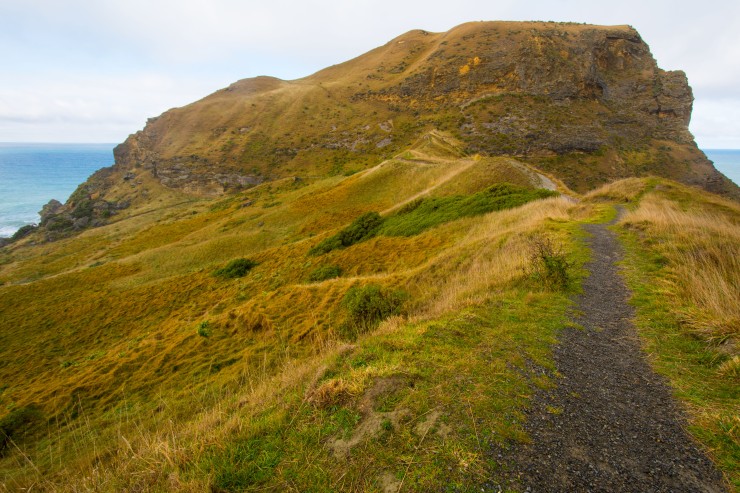 The path was really muddy at first, and it was tricky to stay upright with all the slipping and sliding. Higgs, of course, had no problem. 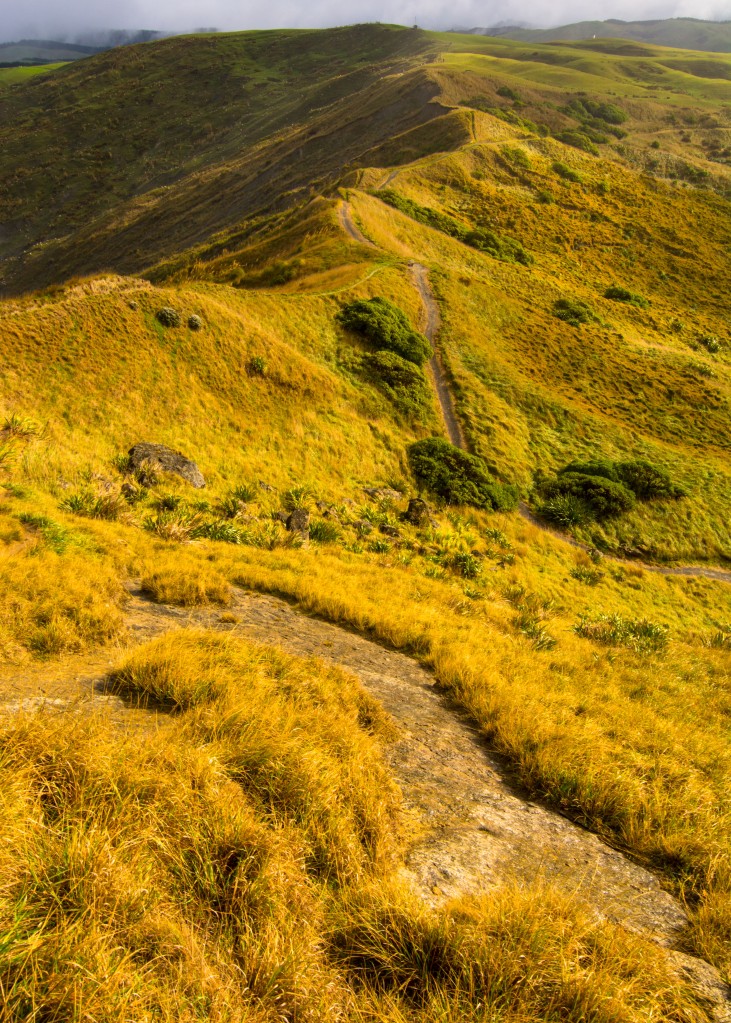 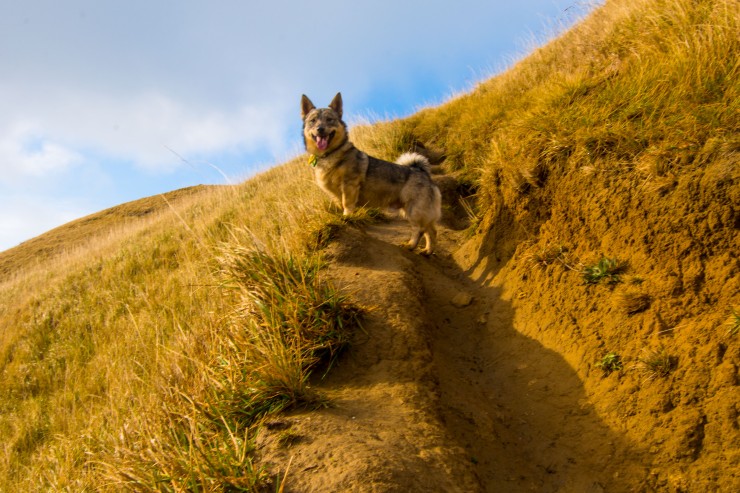 I’m pretty sure he was mentally claiming everything in sight as his domain.

No one else was on the path, so we had the entire rock to ourselves.

I can’t think of many places that beat this spot when it comes to sheer drama and jaw-dropping cliffs. It reminded me of a giant land wave, breaking right above the actual sea.

Higgs had to be leashed at this point, since we didn’t want him venturing close to the edge.

We continued on towards the highest point.

This next one is my favorite shot from the hike because it shows just how dramatic the rise of Castle Rock truly is.

The view looking north towards Castlepoint was great, too.

We reached the top and WOW. What an incredible view.

On the way down, we explored the other side of the rock. 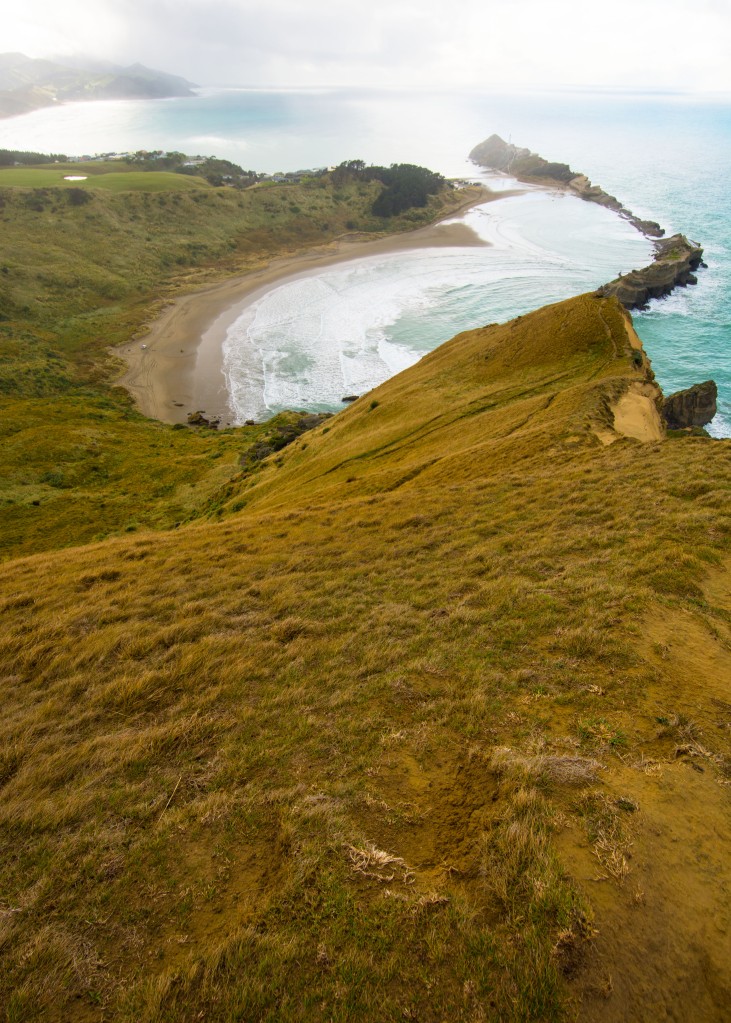 Andy and Higgs found some caves. 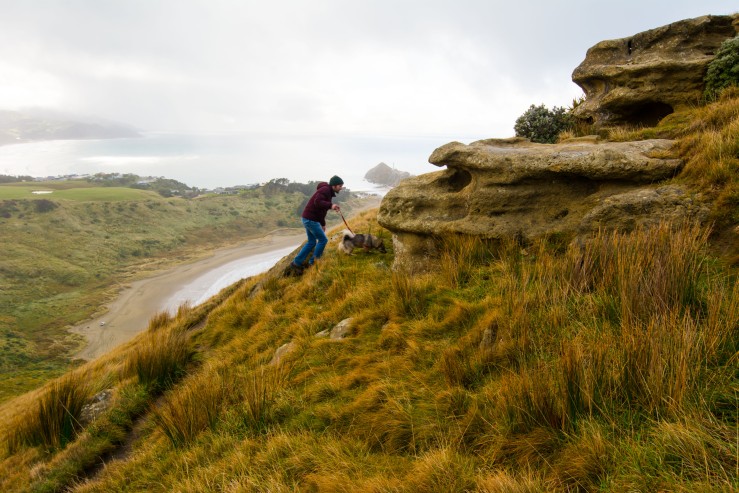 Then we came across another land wave.

I don’t think even Tim Burton could dream up a more surreal landscape. 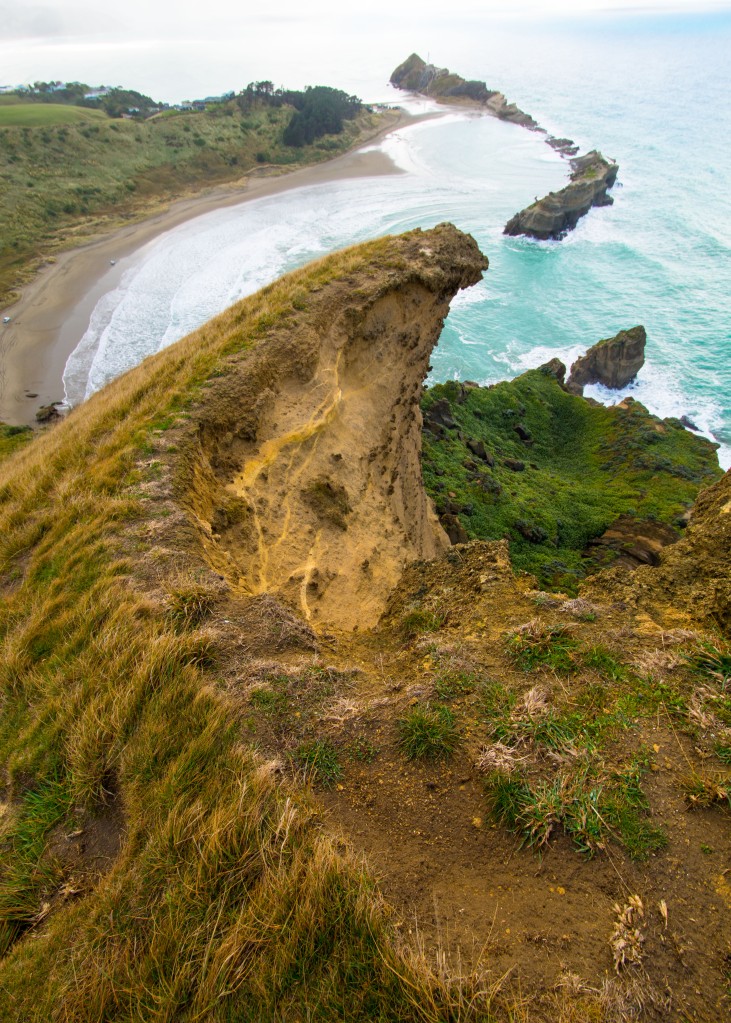 Higgs was pretty upset when I chose to go pose on the cliff.

We said farewell to the unparalleled view and staggering cliffs and headed back downhill. 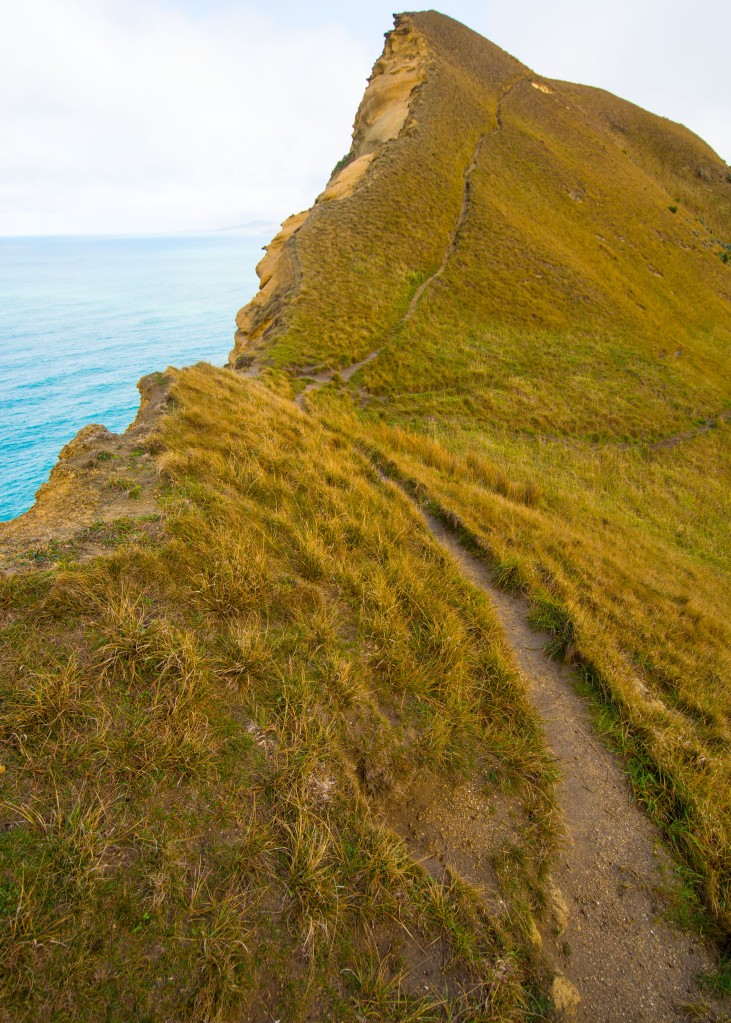 Back to the muddy track.

Instead of going back the way we came, we headed down the steps to the beach. 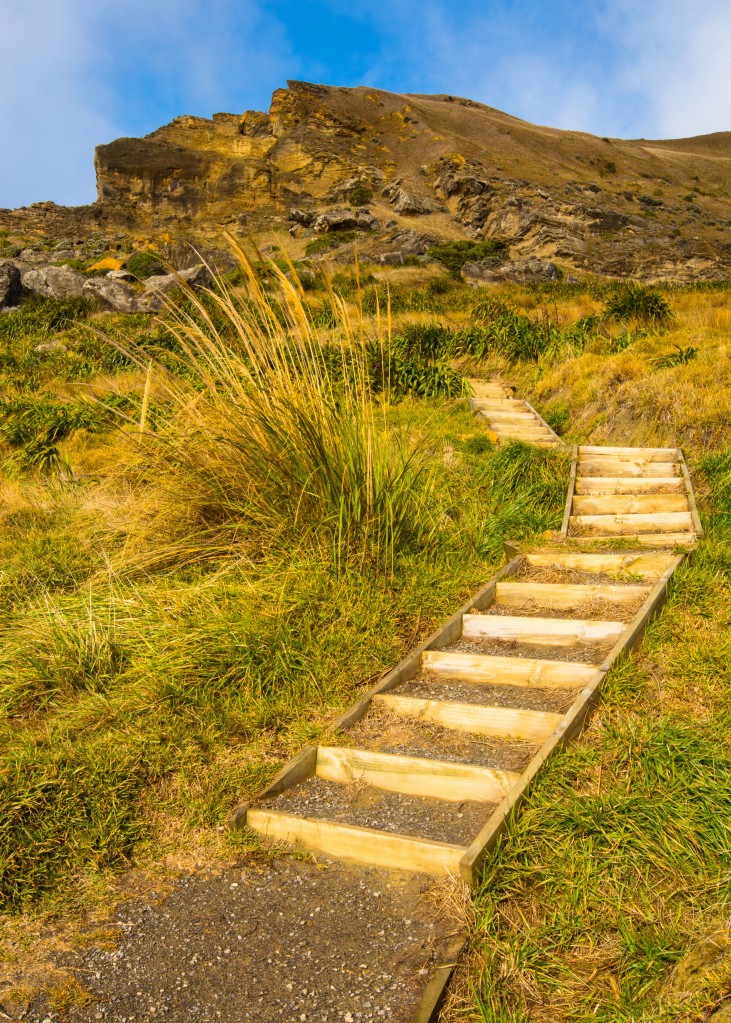 Higgs did his thing and jumped right in the water.

So long, Castlepoint, you wonderful dreamscape. 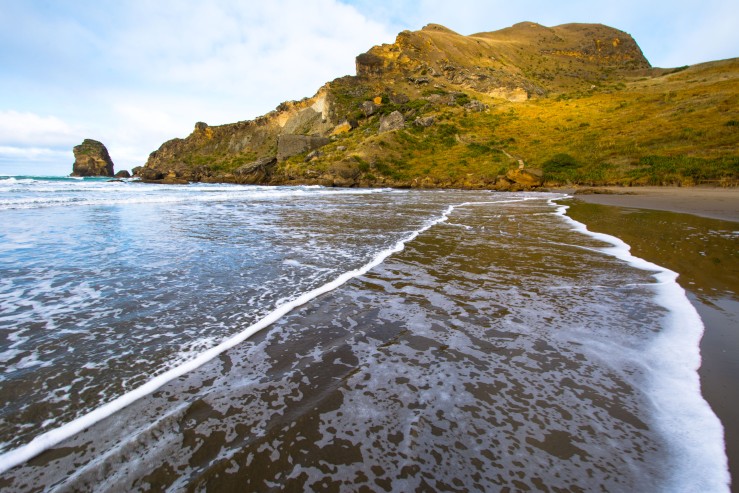 Until the next adventure, here’s one last cute doggy shot of Higgs the Conqueror. 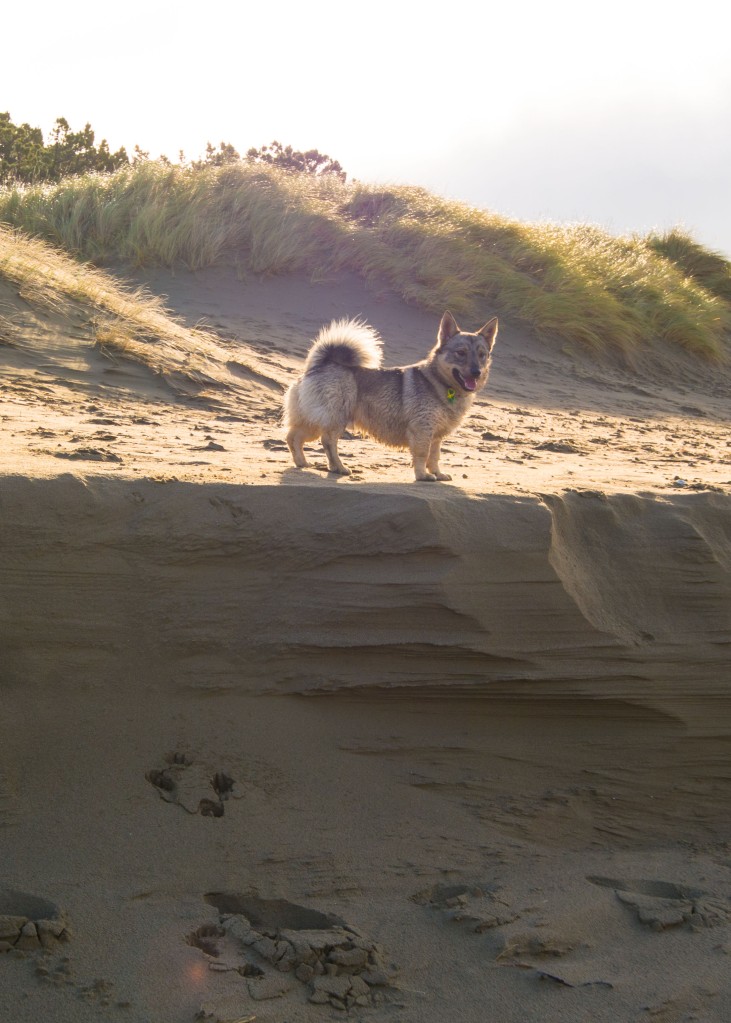