My last morning in Paihia, I caught a bus to Kerikeri, the biggest hub in the Bay of Islands region, to pick up my rental car for the next three days. At the time I was leaving, a cruise ship was just unloading, so I definitely chose the right time to skip town. Kerikeri is one of many towns in New Zealand that are so nice, they named them twice (not necessarily that nice, but had to use the phrase). Others in Northland include Kawakawa, Mitimiti, and Kohukohu. There are plenty that also sound like a four-year-old named them, such as Tutukaka and Waipu (pronounced “why poo”). Paihia even had a bar called the “Pipi Patch.” Pipi is the Maori word for a type of shellfish here… but really?

I digress. Moving on to Whangaroa. After picking up my rental car, I drove (on the opposite side of the car and road!) just under two hours north. Whangaroa is a secluded harbor, just as breathtaking as the Bay of Islands, but far less touristy because of its less accessible location.

My accommodation for the night was the Sunseeker Lodge, and I just so happened to be the only one in the eight-person room. What luck! I got a bed with a perfect view out over the harbor and settled in for a bit before setting out to explore. The hostel owners and my guidebook referred me to a short but steep hike up the nearby Saint Paul’s Rock for an extraordinary view out over Whangaroa and the harbor. Sold!

Upon first catching sight of the rock, I’ll admit the ascent looked a bit daunting. Then again, everything worth climbing in New Zealand usually does. 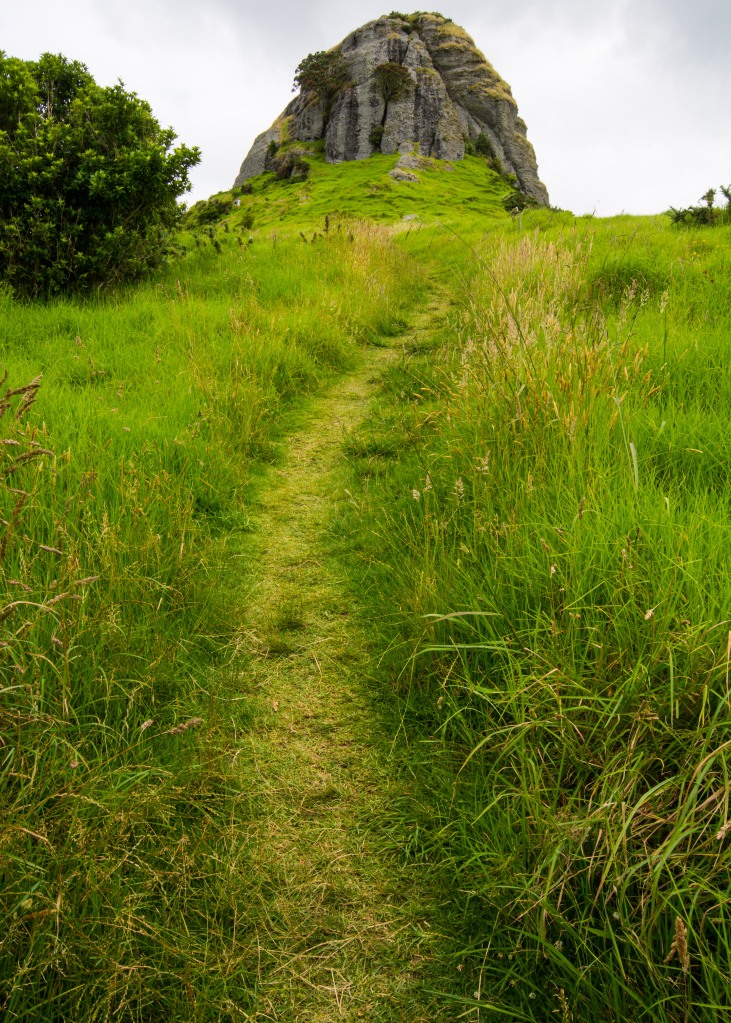 The rock is named after Saint Paul because of its similarity to the dome of Saint Paul’s Cathedral in London. Truly, it reminded me of Weathertop from Lord of the Rings, which only made me all the more enthusiastic about summiting it.

It didn’t take long for the view to take my breath away, as if the steep climb wasn’t already doing that.

I passed a few people on their way down, but not many were headed up at this time of day.

Interesting rock formations were everywhere, as though some ancient giants tossed them haphazardly all over the hill. Of course, I had to climb them! By necessity, I’m getting more and more adept at using the self-timer and setting up the camera when my tripod isn’t on hand. 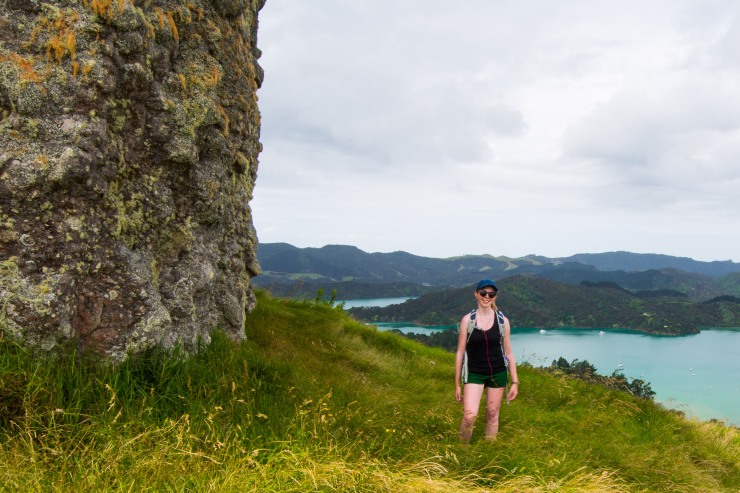 The next part of the path involved a chain, which provides a handhold while climbing the rock’s steepest section. I’d read about it in my guidebook, so I wasn’t too surprised.

It really wasn’t too bad, and the chain was more for an added sense of security than anything else.

This view gets a double thumbs up! 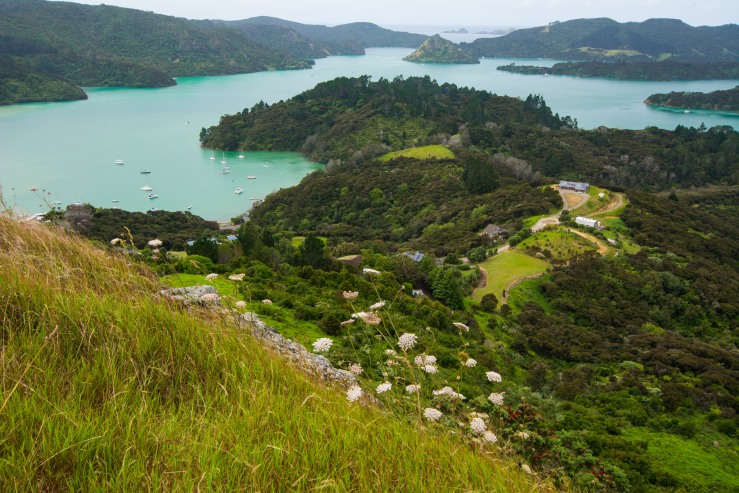 I took my time reaching the summit, since the view was absolutely mind-blowing on all sides.

Inevitably, I did reach the top after a while.

I had the summit all to myself, and I took my sweet time enjoying the view and getting a lot of pictures.

Whangaroa’s port is pretty small, but very picturesque from above. 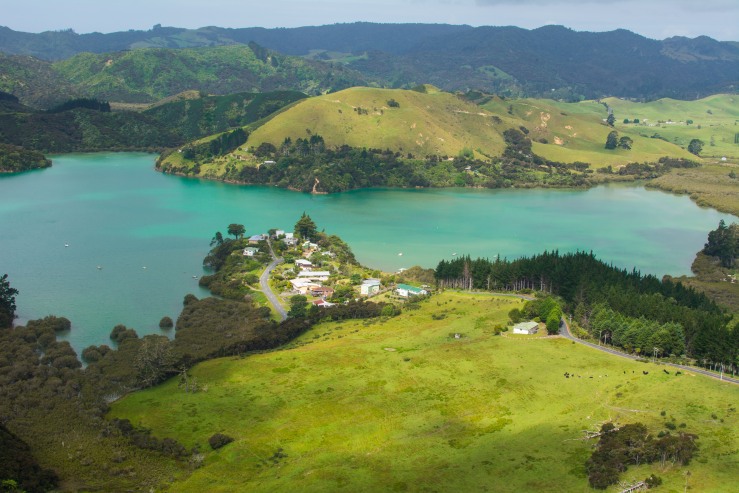 I will never tire of the color of the water here.

It didn’t hurt that the hillsides were all in bloom, either.

I hardly felt the need to do anything else in Whangaroa after starting off with something this spectacular.

I found a perch on the edge of the rock with a great view of the path I’d just taken.

Does it get any greener than this? I don’t think so!

I just had to put my feet up and try to really take it all in. When confronted with beauty so substantial, it’s often hard to actually absorb the reality of it. I took a break from shooting photos to simply appreciate the fact that my life and my journey had brought me to this surreal, otherworldly place. I truly couldn’t ask for more.

The air began to grow a bit colder as afternoon creeped towards evening, so I reluctantly began my descent. I did get the chance to climb one last rock on the way down, though. 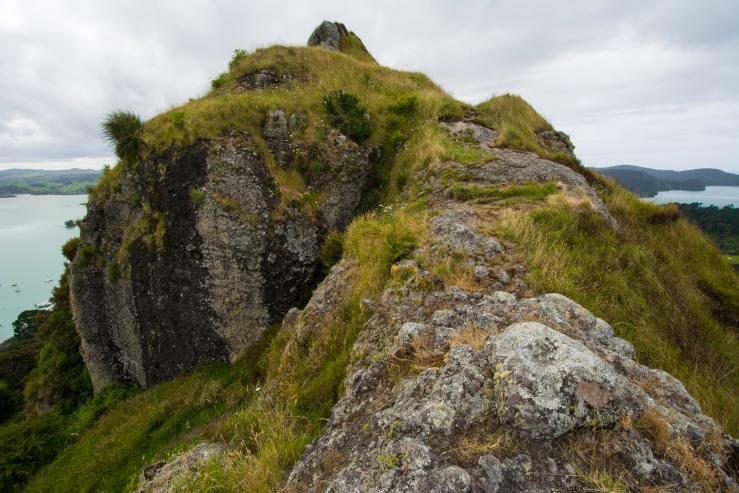 I said my fond farewell to Saint Paul’s Rock, and headed back to my hostel, ready to get some rest before my drive up Cape Reinga the next morning. More to come! 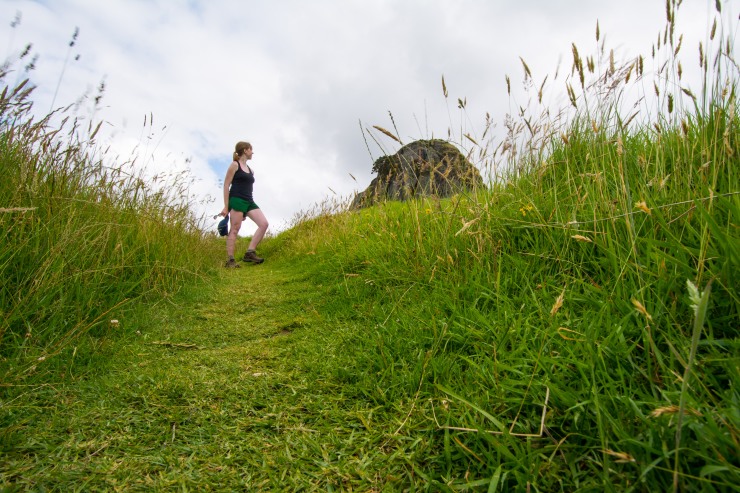 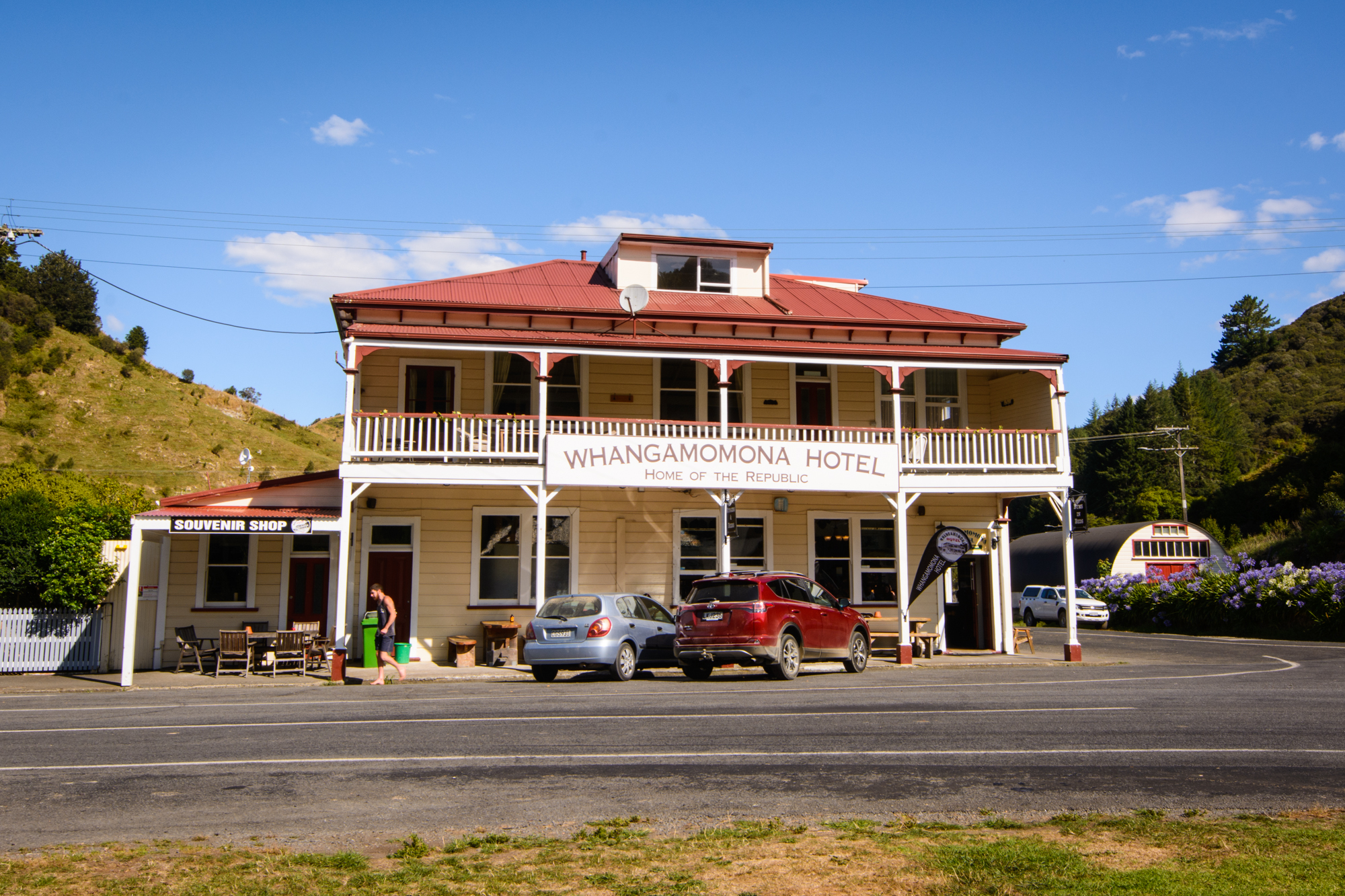 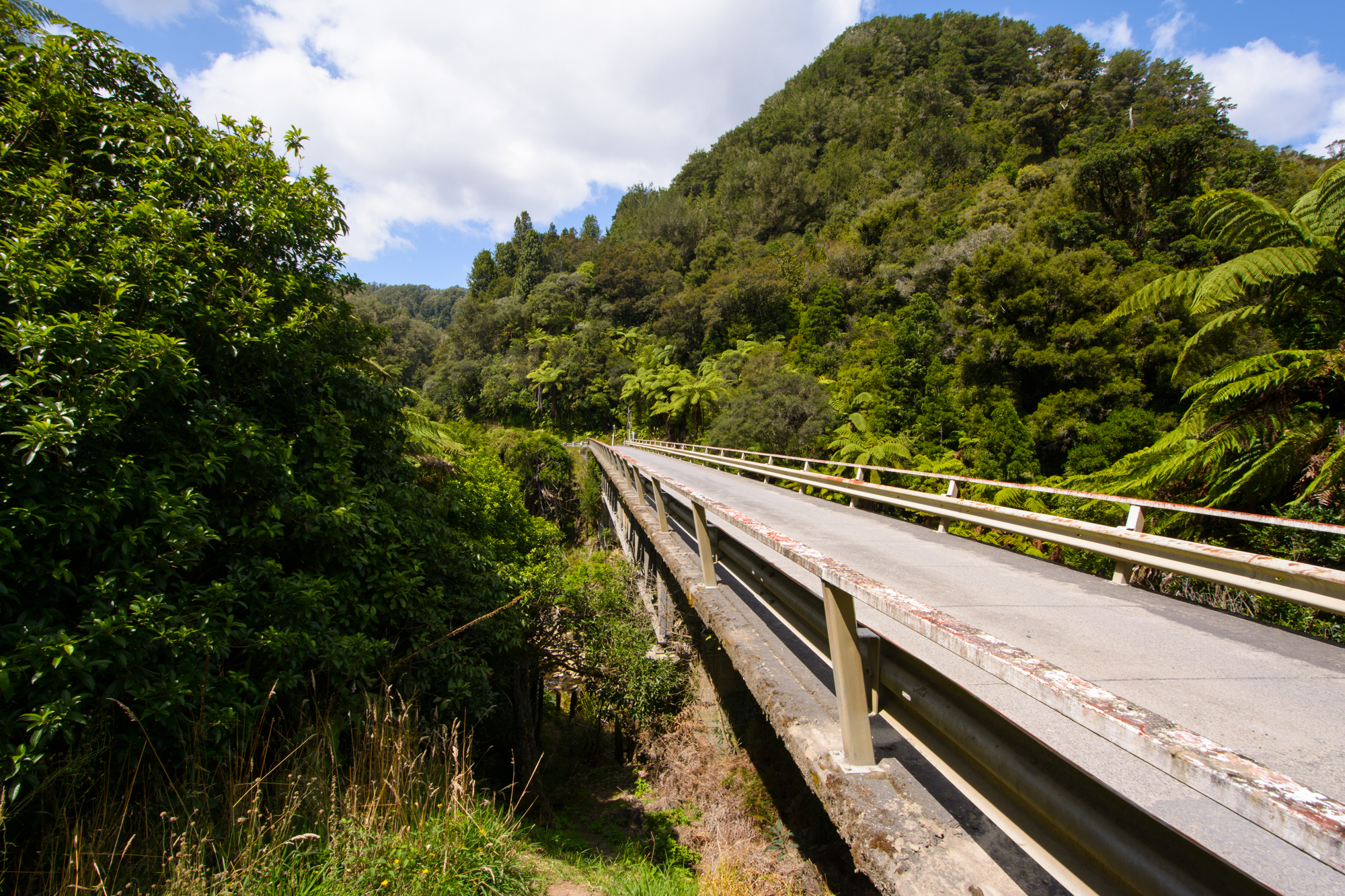 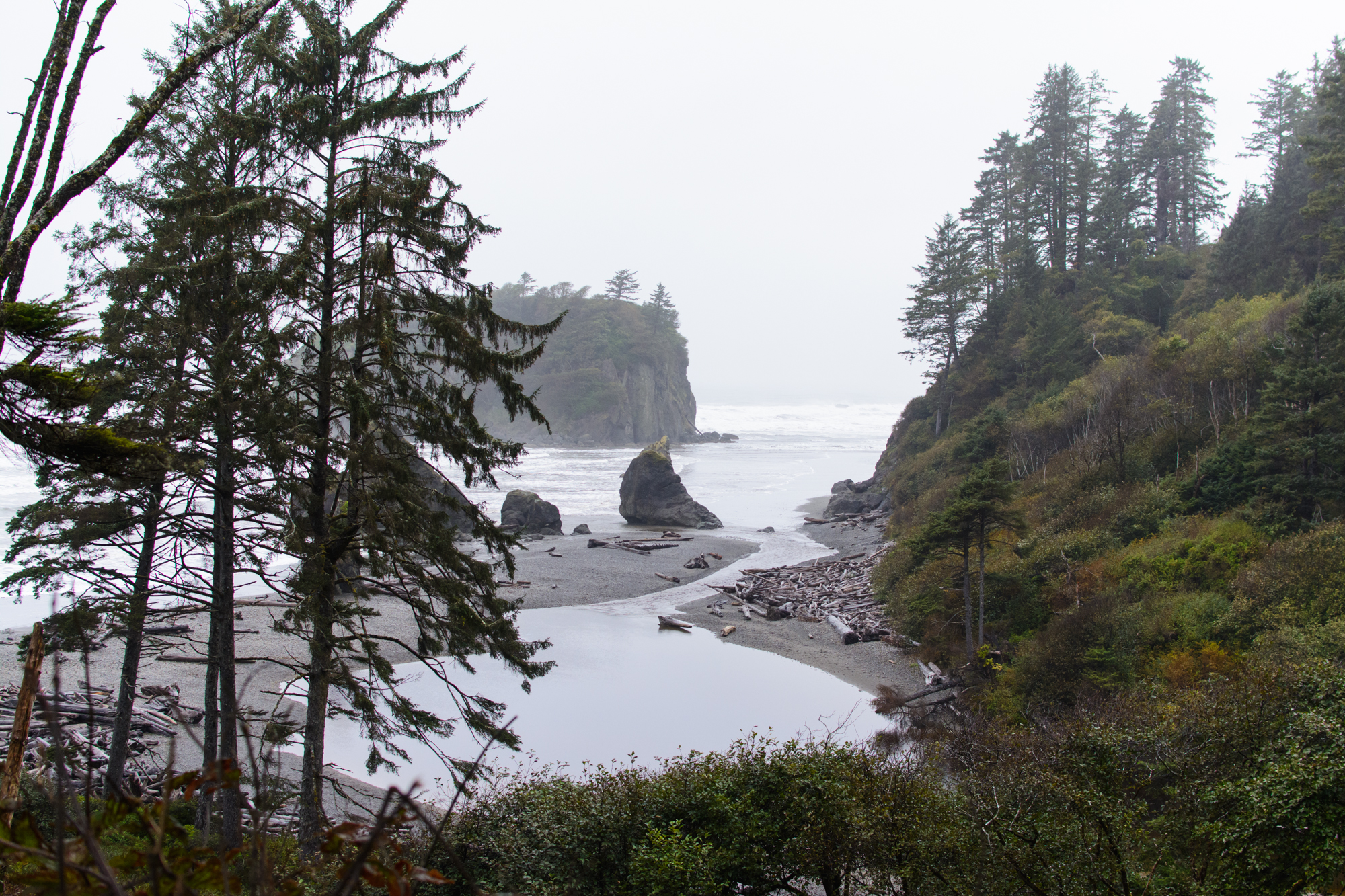